Unlike most wallets on the market, the Stow Wallet (now the Akeeni XSTO) comes with an inspiring backstory.  Let’s review.

Contents show
1 Stow Wallets… A Little Background
1.1 A Rose By Any Other Name?
2 Does It Live Up To The Hype?
2.1 Features
2.2 Size/Dimensions
2.3 Material and Colors
2.4 Durability
3 The Akeeni XSTO/STOW Wallet – Final Verdict

After 30 years as an aerospace engineer in Southern California, Tobe Zane relocated his family back to Northern California where he grew up. But relocating didn’t mean retiring. Like many men, Tobe had gotten tired of his bulky wallet and wanted to apply his engineering chops to creating the perfect, pocket-sized container for his valuables. So he dedicated the garage in his new home to make his vision a reality.

But just as Tobe began to manufacture his wallet, disaster struck. The Carr Fire of 2018 ravaged Tobe’s community and burned his home to the ground, along with his products and manufacturing equipment. Thankfully, Tobe and his family escaped unharmed, but the business was in shambles. Most entrepreneurs would give up at this point, but Tobe believed in his product enough to start again, and so did hundreds of folks who supported them on Kickstarter.

The result is “a wallet forged by fire” with a die-hard following and a boatload of confidence. Its packaging even comes with the message “The Last Wallet You’ll Ever Need”.

A Rose By Any Other Name?

And then came some more changes. The company became Akeeni, the Stow Slip Wallet is now the XSTO. So what does that mean for the company and the wallet? The XSTO Wallet is an evolution, not a revolution – which implies learning and developing, not rethinking completely. So far, so good.

Does It Live Up To The Hype?

The Stow Wallet featured a truly unique design that could revolutionize the way you think about minimalist wallets. However, all this new thinking does come with a few trade-offs. And even if it isn’t the wallet for everyone, it is a wallet that every wallet enthusiast should know about.

Overall, the Stow Wallet comes with three separate carrying features for credit cards, cash and business cards. It also comes with a universal phone mount that lets you connect it directly to your phone case.

See Also:  Are Wallets Obsolete? 7 Reasons the Wallet is Here to Stay!

When you purchase the Stow Wallet, you have a choice of four sizes, differing only in their capacity to hold 4, 6, 8, or 10 credit cards. (The price is for the 4, 6, and 8 is the same; 10 is a few bucks more.) Right upfront, this shows how the Stow Wallet is engineered with a kind of precision lacking in most other minimalist wallets. Instead of a one size fits all approach or a wide range of card storage, the Stow Wallet is optimized for a certain number of cards, which requires you to have a clear idea of how you want to use your wallet from the very start. So if you want that extra flexibility, the Stow Wallet might not be the choice for you.

The experience of moving cards in and out of the Stow Wallet is what really sets it apart. Its unique design relies on two slightly hooked sides parallel to each other. This way you can slide cards into the wallet from two different sides, and review them the same way you would a poker hand. This kind of simultaneous access to all your cards at once is truly a game changer.

With so much access, there’s the worry that cards can easily slide out, but the tension created between the two tapered sides and a ridged backing plate inside the body holds everything in place. Best of all, when your cards are all firmly inside the card-carrying area of the wallet, it makes a snapping sound. It’s a nice, subtle touch that lets you know your precious cargo is locked up and good to go.

Stow claims that eight folded bills can be stored underneath the card area on the ridged plate at the bottom of the card chamber. This appears to be true, but it depends on what kind of currency you carry. US dollars, Aussie dollars, and Canadian dollars all fit just fine, but Yen and Euros are too wide to fit comfortably inside. So if you’re the kind of guy who does a lot of international travel, the Stow Wallet might not be for you.

The best thing about the cash-carrying feature is that by sitting on the backing plate, it actually works to add more to the tension holding everything in place. You can still see a sliver of your wad of cash when you hold the wallet from the side, but there’s no way it’s going to slide out. It’s in there too tight.

The other nice thing about the position of cash in this wallet is that it remains out of sight from prying eyes, all while giving you ease of access. Of course, if your style involves flashing cash and “making it rain”, you’d do better to find a wallet with an external money band or clip. 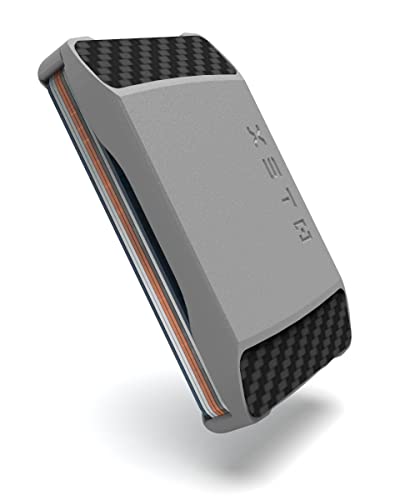 It’s a nice idea to have a dedicated place for business cards in a wallet of this size, and you could also use this chamber for credit card overflow if need be. However, having this function rely on an unattached and easily misplaced component is a bit of a head-scratcher for such an otherwise well-designed and self-contained wallet. If you lose the business card cover, what then? The Stow Wallet website does sell extra business card covers, but does purchasing the “Last Wallet You’ll Ever Need” really mean committing to replacement parts?

The Stow Wallet also comes with a small metal plate with raised corners that allows you to connect it directly to a phone case using (included) 3M command strips. The plate fits neatly into the credit card compartment and locks using the same tension principle the wallet is built on. It’s a nice peripheral to have if you want to combine your wallet with your phone.

Of course, when it comes time to change your phone case, you’ll have to rig some new command strips or buy a new phone case attachment from the Stow Wallet website.

In terms of size and dimensions, the Stow Wallet is about what you’d expect. The length and width come in at 3.6 and 2.3 inches respectively, which is a bit bigger than the credit cards it holds. In terms of depth, it’s a slim 0.6 inches, which isn’t the thinnest wallet out there, but it definitely cuts a lean profile.

Given the founder’s past as an aerospace engineer, it only makes sense that the body of the wallet is crafted from a single piece of aircraft aluminum. That means that for a metal wallet, it’s surprisingly light.

The Stow Wallet comes in a variety of solid colors, some of which have a more painted, matte finish, while others twinkle with the grain of the milled aluminum. Beyond standards like Jet Black and Frost White, offerings like Atomic Tangerine and Electric Purple round out the catalog for those of us who want our wallets to be forever festival ready.

The main body of the wallet is practically flawless in terms of durability. Of course, with a few power tools, you might be able to do some damage. But everyday wear and tear isn’t going to be an issue. 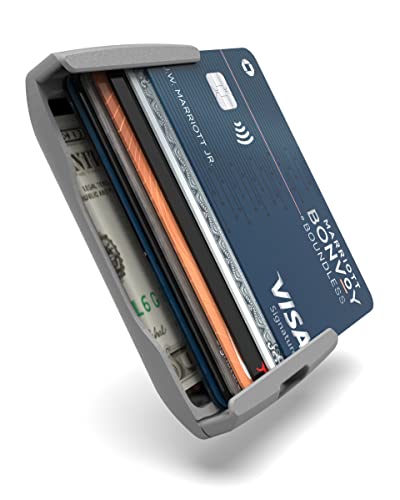 The Stow Wallet’s weakness in terms of durability is the business card cover. It’s not so much that it’s less sturdy than the main body of the wallet. It’s just that it’s separate from it. One wild night and it and all of your business cards could go missing.

The Akeeni XSTO/Stow Wallet is an impressive piece of work. From its unique, groundbreaking design to the body’s solid construction, this wallet has so much to offer. Of course, it’s not without drawbacks, as small as they might be. Having to choose the range of your wallet upfront is a little annoying and the detachable business card cover might prove more trouble than it’s worth if you’re using this function a lot. But all in all, we’re big fans.

Looking for the perfect gift? We've got you covered - read our Ultimate Wallet Gift Guide!